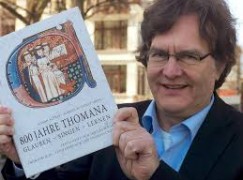 Hail and farewell to a Bach cantor

On 31 January 2015, Georg Christoph Biller, 59, retired from his position as Cantor of the St. Thomas School.

He was the sixteenth person to hold this post since Johann Sebastian Bach, having begun his tenure on the first day of Advent in 1992. The reasons for his stepping down after twenty-two years of service were health-related and personal.

The leader of the parish of St. Thomas, Britta Taddiken, announced in reference to Biller’s retirement that “one of the truly great Thomaskantor eras has now come to an end.” His having maintained the St. Thomas choir over so many years at a world-class level has earned him, in her words, the “greatest respect.” Biller’s last official performance will take place on 17 June 2015 in the context of the Leipzig Bachfest. He will lead the choir in the premiere of a work by Stephan König, which is dedicated to him and to them.