Gidon Kremer on Russia: When elephants clash, the grass suffers

The magazine Music & Literature has published a somewhat unidiomatic translation of an interview given by the great violinist in Kiev last November. It contains some sublime and surreal reflections on the state of the world, as well as Gidon’s strongest statements yet on the Russian intervention in Ukraine.

To draw any newsworthy conclusion would risk taking his humane and principled views out of context. But read the paragraphs below and you will catch the drift of his thinking. 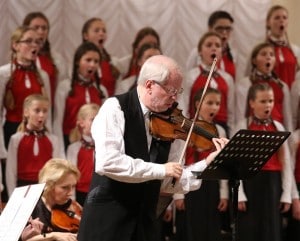 When I think about the events of the past year, I find that the concept of “human life” has been profoundly devalued. What we are all given is a single life to share. If that sounds sentimental, so be it: it was Ostrovsky’s opinion, and Brodsky’s, and that of many others. And there are those today who want to destroy this notion of life as a physical and spiritual gift. It doesn’t matter what they hide behind—politics, economics, ethics, religion. When talk turns into destruction, everything within me rises up. The Nazis murdered, the Bolsheviks killed, the Latvian gunmen fired. Once you have followed them, unable to respect the right to life of your neighbor, colleague, or brother, then it’s a very short stretch from one victim to one million victims. How terrifying, that the person who sends another to kill and the person who is sent to kill are both infected with the belief that murder is the key to moving forward, to perfecting justice. The very people defending “their land,” “their language,” “their homes” become the unwitting victims of a tragic calculus. Some, denying others the right to question anything, call it “belief in an historic mission.”

Let me reduce this to a formulation so simple as to seem trivial in comparison with today’s tragedy: when a couple splits up, one of them inevitably has to pack a bag and leave first. It happens sometimes that the one who ups and goes is in the right. Or that the one who stays behind is. But it rarely happens that both people pack their bags at once.

« Topol turns out to see Terfel