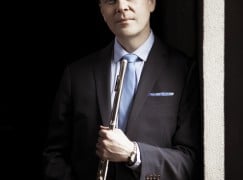 Double-blow for Met: Both principal flutes resign in one day

We reported earlier, in a Slipped Disc exclusive, that Ukraine-born Denis Bouriakov, 33, principal flute of the Metropolitan Opera orchestra, has accepted the same post at the Los Angeles Philharmonic.

We now understand that the Met’s other principal flute, Stefán Ragnar Höskuldsson, has won the vacant principal seat in the Chicago Symphony Orchestra.

To lose one principal flute is unfortunate. To lose both smacks of something rotten going on at the Met.

We hear that several younger members of the orchestra are auditioning elsewhere this summer.

There is a feeling that Peter Gelb does not care much for anything that is not seen on stage. He was overheard saying, ‘the orchestra doesn’t have to always sound that great’. Musicians are drawing their own conclusions. They are voting with their feet.

Riccardo Muti: ‘This championship is for all of Chicago’ »