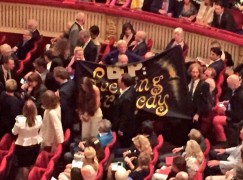 Two protestors, who named themselves as composers Kate Honey and Dr Chris Garrard, held up a banner and chanted slogans on Wednesday night at the end of the first interval of La Bohème. Others continued the protest outside.

The banners read ‘End Oil Sponsorship’ and were aimed at BP, a major sponsor of the ROH and the British Museum.

Honey said: ‘By accepting BP’s money, the Royal Opera House is giving BP a legitimacy that it does not deserve. With this ‘social license’, BP is able to keep drilling for new sources of oil that will push us into runaway climate change, putting my generation’s future at risk. As composers and musicians, I feel it is our responsibility to defend classical music from appropriation by corporate criminals like BP.’

Garrard added: ‘The conductor Claudio Abbado once said, ‘Everything that is not for freedom, I protest’. By supporting repressive regimes in West Papua and Azerbaijan, BP has made it clear that it is not on the side of freedom. BP should have no place in our cultural institutions when these are spaces where freedom of expression is celebrated. This is why I felt called to protest BP’s presence at the Royal Opera House.’

The FT reports: The Royal Opera House, which said BP had been with it “through thick and thin” with a partnership beginning in 1988, said it had begun the staff consultation process on sponsorship renewal.

New York Times awakes to a crime on its doorstep »