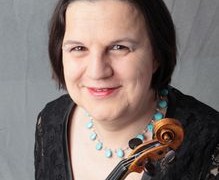 The new issue of Das Orchester, monthly journal of the German orchestral industry, sets its focus on diversity. Hearteningly, it covers the entire gamut of possible prejudices from race to trans-gender.

In one absorbing article, a member of the second violins of the Bavarian State Orchestra describes how he transitioned from male identity to female with enlightened support from the organisation and the musicians.

Daniela Huber passed the audition for the orchestra in 1978, as a married man with small children. In the mid-1990s, Daniela underwent gender realignment surgery and returned to the orchestra as a woman.

Daniela was fortunate to find a sympathetic doctor in the company. He brokered a meeting with the intendant, Sir Peter Jonas, who told Daniela that he had a similar experience in his own family and knew of another orchestral musician in Bavaria who had transitioned the other way. Daniela felt totally supported.

Not every musician would find it so easy. This is a heartening story of compassion and respect for human difference, an object lesson for organisations in handling the infinite varieties of human difference.

The article, which is in German, is not online; you will have to lay hands on a copy of the magazine to read it.

Ornette Coleman interview: ‘All a human being can do is help his brother and sister’ »