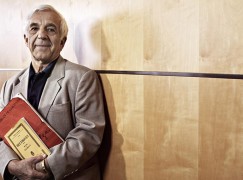 The veteran conductor and pianist Vladimir Ashkenazy today quit the European Union Youth Orchestra ‘with immediate effect’. He has been its music director for 15 years, succeeding Bernard Haitink (who, in turn, succeeded Claudio Abbado and Colin Davis.

We hear that Vova had a principled difference of opinion with the orch’s managing director, Marshall Marcus, who wanted to steer it closer to the orbit of his alma mater, the Venezuela-based El Sistema movement. A genial man who generally avoids confrontation, Vova’s patience apparently snapped when he was offered a reduced role.

Vladimir Ashkenazy has announced today that after 15 years as Music Director of the European Union Youth Orchestra he has resigned with immediate effect. He was appointed to this position in 2000 in succession to Bernard Haitink who had been preceded by Claudio Abbado and Colin Davis.

He sends his best wishes to the orchestra’s wonderful musicians, present and past, for whom he feels the warmest commitment and affection. It is a matter of great satisfaction to him that during his 15 years as Music Director so many alumni of the EUYO have taken up leading positions in top orchestras throughout the Union. He also extends  his love and admiration to Joy Bryer the founder and  irreplaceable mentor of this great and noble institution which has so profoundly changed the ethos  of orchestras throughout Europe by inspiring  two generations of musicians to bring to their lives in music new levels of professionalism and engagement.

The most intimate moments in the Mendelssohn family »