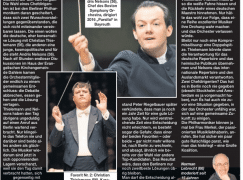 In the aftermath of what is known locally as the Berliner Failharmoniker (tweet (c) Johannes Kreidler), Der Tagespiegel points out today that the city is actually in the market for no fewer than three chief conductors.

The Philharmonic appears to be no closer to making up its collective mind about Simon Rattle’s successor, perhaps because it refuses to address exactly what it expects from a music director. I discuss the situation in an essay for the new issue of Standpoint magazine here.

The other vacancies are more straightforward. The Deutsche Symphonie-Orchester needs to replace the over-busy Tugan Sokhiev (music director at the Bolshoi and Toulouse) and the radio orchestra is losing the veteran Marek Janowski.

Both of those positions are in the gift of the organisations’ managements. The DSO has set up a search committee composed of three musicians and three members of the management. The radio orchestra is rather more top-down in its search. These two appointments may well be made before the Berlin Phil finally gets over its anarchic spasm.