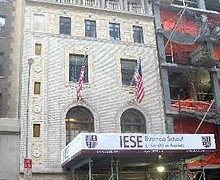 Wilford chaired and largely owned CAMI, the largest classical agency with several hundred artists on its books. In recent years he confined his activities to a tiny handful of cherished conductors but his writ ran across the company and his personality continued to dictate its policies.

Jean-Jacques Cesbron, his next in line, is Lang Lang’s manager, a businessman with more flair for show than substance. He, and the agency, have shown little interest in emergent talent and artists of depth. All the young conductors who have emerged in the past decade have taken their talents elsewhere. As far as classical music is concerned, CAMI has been in slow decline. It has forsaken its 57th Street fortress and is no longer first port of call for orchestras in search of the next music director.

That said, it still manages the careers of several hundred artists and the absence of Wilford – whose passion for classical talent was unquestioned – will shake their confidence in the giant agency.

The only other agency of comparable size, IMG Artists, is in a state of advanced disintegration with agents and stars departing on an almost monthly basis and its hapless owners powerless to stem the flood.

The two pillars of the classical music business are in disarray. These are turbulent times. CAMI has issued a ‘business as usual’ notice in the hope of stemming uncertainty. But Wilford’s death changes everything. The forces that have controlled classical music careers for as long as anyone can remember are orphaned of their emperor.

The only artists who can feel secure are those with dedicated small management and a well-defined mission.

For more on Ronald Wilford, read The Maestro Myth.