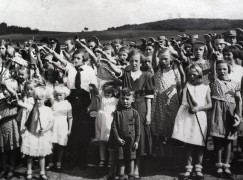 A maestro finds his anti-Nazi rebel 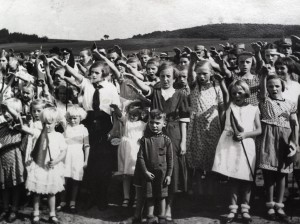 It’s a photo from a family scrapbook, taken somewhere in Bavaria in 1936.

All the children are raising their arms in the Hitler salute, marshalled by a couple of adult Nazis.

One little boy in the front keeps his arms stubbornly at his side.

Who is that little boy?

Fabio Luisi, principal conductor at the Metropolitan Opera, tells Slipped Disc:
‘The little boy in the first row is (my wife) Barbara’s father, Johann Eichinger, born 1931. He is the only one in the crowd who is not doing the “Hitlergruss” (and not screaming “Heil Hitler”).

‘His mother forbade him to do the “Hitlergruss”, he listened and he was allegedly very proud about his own behaviour.

‘His family was a German anti-nazi family, and they had a lot of problems because of this picture.

‘We find this picture highly remarkable, showing that there were Germans who did not follow the collective Hitler hysteria, even educating at their own risk their children not to be a number in the crowd.

‘Johann (Hans) is my father in law now, he can remember that day and is still proud. In the second picture you see him with Barbara, my wife, me and his wife Gitta Eichinger.’ 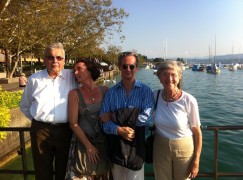 The singer’s tale: ‘I was sobbing and shaking in William Tell’ »