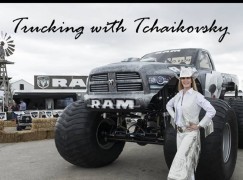 ‘Who Made Tchaikovsky Gay?’ (a revisionist question)

The Prokofiev scholar Simon Morrison has written a long essay in this week’s Times Literary Supplement, turning back the clock on a generation’s assumptions that Tchaikovsky was homosexual and that his death was not caused by drinking cholera-infected water.

Morrison is aware that he may give comfort to current Putinist musicology which (using the accusatory headline above) seeks to ‘cleanse’ the composer of the Putinist crime of gay sex, dismissing the aspersions of homosexuality and violent death as western inventions.

Morrison is exceptionally harsh on the British biographer David Brown, who ‘imagined (Tchaikovsky’s) life from having listened to the music.’ His critical argument, however, is with both sides, east and west, for trying to find the key to Tchaikovsky’s music in the circumstances of his life’s conflicts. Somehow we have all climbed into bed with him, wondering what went on in the great composer’s boudoir and whether or not, for the sake of his reputation and Russian culture in general, the linens should be sent to the cleaner.

« A classical record master has died

A dark horse at the Berlin Philharmonic? »