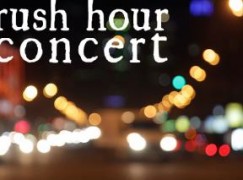 It was Deborah Borda’s most brilliant innovation when she was running the New York Philharmonic Orchestra – a 45-minute 6.30pm concert, followed by drinks and snacks, that enabled city workers to sit out the tail-jams in comfort at Lincoln Center and get some social life before heading home on empty autoroutes. Other orchs copied it around the US, then forgot about it.

Now, two decades later, Zurich has copied the idea. Th Tonhalle announces it in a new programme this morning:

On three Thursdays (10.12.15 / 11.02./17.03.16) there will be the opportunity to escape the rush hour and spend the after-work hours at the Tonhalle. The new format TOZintermezzo presents an orchestral work performed by the Tonhalle Orchestra Zurich under the guidance of Lionel Bringuier. Hazel Brugger kicks off the event with a poetry slam. Drinks and snacks will be served at the end of the approximately 45-minute concert, and the audience has the opportunity to meet all the performers.

Somehow, Zurich manages to dull it down.