Report: 13% of US music directors are women

Public television in Seattle has broadcast a report on the state of equality in the US podium.

In the top 25 US orchs, with budgets over $15 million, there is only one music director – Marin Alsop at Baltimore.

But down the budgetary scale there does seem to be an upturn, slow at it may be. Watch. 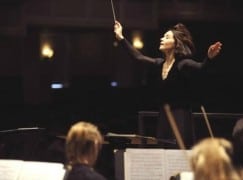