Remembering the conductor that got shot

The Berlin Philharmonic, setting aside other distractions, is dedicating this weekend’s concerts to the memory of Leo Borchard, who conducted its first post-Hitler concert on May 26, 1945, standing in for Wilhelm Furtwängler who had fled to Switzerland.

Borchard, 46 at the time, had been born in Moscow to German parents and lived in Berlin through the Nazi era, doing his best to help fugitives by furnishing them with false papers.

On August 23, 1945, returning home from a concert, Borchard’s British army driver misread a ‘halt!’ sign from an American sentry, who shot the conductor dead.

In September 1995, Claudio Abbado inaugurated a Berlin tradition of remembering the shot conductor.

An exhibition on his life opens tomorrow at the Philharmonie, marking 70 years since his death. 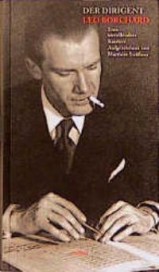