Stephen Roe, the scholar who set up regular music manuscript sales at the auction house 35 years ago, is leaving today to pursue other interests. He may be irreplaceable.

Stephen went to Sotheby’s straight from university (Worcester College, Oxford) and has been wondering for a while if there’s a world out there.

He used to work alone and produce all the sale catalogues himself.  My earliest experience of him was the phenomenal sale of the original Le sacre du printemps score in 1982. 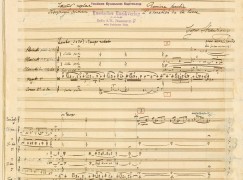 Since then he has uncovered and sold 6 Bach cantatas; Schumann’s Piano Concerto, Mahler’s 1 Symphony, Lieder eines fahrenden Gesellen, Totenfeier, fragments of the 10th symphony; 9 Mozart Symphonies, which still holds the world-record price at £2.6m for music ms and much, much more.

He has sold locks of hair of Mozart, Beethoven and Brahms, holds the world-record price for a piece of printed music  (J.S.Bach’s Clavieruebung book 1) and discovered any number of missing works by great masters.
He is leaving to concentrate on writing, with a biography of J.C. Bach on top of his pile. He will also be dealing in Music, Manuscripts and Books through his company Stephen Roe Ltd, and will remain linked in some way to Sotheby’s, as International Senior Consultant.

They will seriously feel his loss.