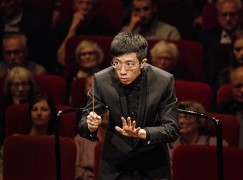 There were two Germans and a Taiwanese in the final. Here’s what happened.

Press release: 317 aspiring conductors applied for entry to the 2015 Malko Competition. Two dozen made it through

pre-selection. After five intense days at DR Koncerthuset the victor was crowned in Copenhagen tonight.

HRH Prince Henrik, the patron of the competition, was able to announce Tung-Chieh Chuang, 32, from Taiwan as the winner of this year’s competition. David Niemann from Germany won second prize, and third prize went to Jesko Sirvend also from Germany.

Tung-Chieh Chuang will receve a €20,000 cheque and have jury president Sakari Oramo as his mentor for the next three years. The title also brings engagements with twenty-seven of the leading European orchestras, including the Stockholm Phiharmonic, the Oslo Philharmonic, and the Munich Philharmonic, and of course with the competition hosts, the Danish National Symphony Orchestra.

President of the Jury, maestro Sakari Oramo commented: “The competition has a thoroughly high level, every single one of the 24 original contestants hold a professional ability to conduct. The differences are in their respective ways to lead, inspire and enthuse the orchestra, as well as in the many nuances of their musicianship. Feedback sessions that all contestants have spent with every jury member have been the most valuable and important element of this competition. I am very much looking forward to working as a mentor for Tung-Chieh Chuang.“

About the winner: Tung-Chieh Chuang

The breakthrough for Tung-Chieh Chuang, 32, from Taiwan came in 2013 when he won the Mahler Competition. Since winning 2nd prize and audience prize at the most recent Solti competition (1st prize not awarded), Chuang has attracted numerous worldwide engagements. He has worked with Die 12 Cellisten der Berliner Philharmoniker, Bamberger Symphoniker, National Symphony Orchestra (Taiwan), Taipei Symphony Orchestra, among others.

« Russia’s most celebrated ballerina has died

Exclusive: Yo Yo Ma fills in for sick orchestral cellist »