Following moves by Colorado Symphony musicians to disaffiliate from the AFM, session musicians in Los Angeles are agitating for non-union recording in the film studios. One activist, Richard Kraft, predicts this will happen in a matter of months. Read his post (below) from the rebel website. 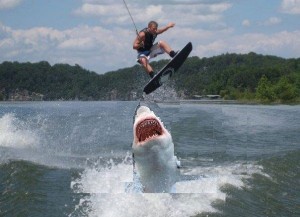 WHEN DID THE AFM JUMP THE SHARK?

While things have been awful for LA Session Players (dropping from a $50 MILLION a year industry to one worth only $15 MILLION), there was always a sliver of hope something would somehow save the day.

Things took a dramatic turn for the worse over a year ago when the Union decided to direct its focus on its infamously embarrassing and completely ineffectual LISTENUP campaign that tried to drum up work by shaming potential customers. That ended disastrously.

On the heals of that blunder they idiotically and recklessly shifted their attacking and accusing tactics towards their greatest allies, COMPOSERS blaming them for their woes.

This started with them bring up Austin Wintory on charges, continued by calling out the extremely well-liked and respected John Debney and then peaked recently when Ray Hair sent out a letter smearing composers within his Motion Picture Agreement ratification package.

I suspect history will see that as the tipping point in this whole drama.

The domino aftereffect of that ultimately reckless action already includes the normally apolitical Society of Composers and Lyricists stepping up and denouncing those actions and, for the first time, clearly laying out options for its members, including Fi-Core.

Messing with the Composer community was THE dreadful mistake paving the way for a series of almost inevitable fallouts. The downward dominos will most likely continue to fall when the Task Force assigned to finding paths to address revitalizing recording will come back shortly empty handed (rumor is they are doubling down on no buyouts, even in video games).

It will be abundantly clear that all the AFM will have to offer to address their plight will be meaningless tax incentive gibbilty-goop, prattle of “enforcing” their existing deals, and some gibberish about sister Unions and government officials lending support.

It is most likely the Task Force will emerge with nothing but empty words and no game plan.

This will force those clinging to any hope of a Union reversal of direction into needing to consider other options for themselves.

All of this will set the stage for the eventual rise of open non-Union recording in Los Angeles.

I suspect this will happen within months.

Once the Shark has been Jumped, there is no going back.

Orchestra parents: Do you take the kids on tour? »