A glimmer of light and happiness from Bologna, where the new US-Italian president of Bologna Football Club, Joseph Tacopina, has launched a US fund-raising campaign on behalf of Teatro Comunale di Bologna.

‘I love the town. I love its theatre,’ he tells the local paper.

Together with artistic director Nicola Sani he has founded a US Friends of the Teatro Communale and will be pushing to raise funds from new sources for the outstanding ensemble.

Can any other opera house call on a football owner for support? 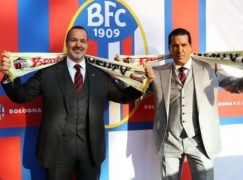