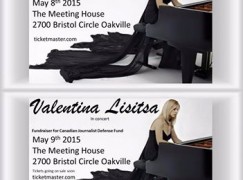 Two recitals on May 8 and 9 in Oakville have been called off by the pianist after doubts came to light about the organiser’s credibility.

Documents seen by Slipped Disc reveal that the concert organiser, a developer by name of Les Holdway, made claims of being linked to two charities and gave assurances that he had made payments  both to the concert venue and to Steinways for a grand piano.

None of these commitments was validated.

On Friday, Lisitsa ordered Holdway to take down the concert announcements and refund those who had purchased tickets. Holdway had offered to put on the concerts ‘in defence of freedom of expression’ after the Toronto Symphony buckled to local Ukrainian pressure and cancelled a concerto by Lisitsa, who has tweeted anti-Kiev material. The TSO action provoked a wave of sympathy for the soloist among the Toronto public and media. Holdway’s hapless intervention has not helped her cause.

I don’t know what the reasons are behind your intent to make the concerts on May 8 and 9.  Whether you saw an opportunity as an entrepreneur to make some money on my “five minutes of fame” – or you genuinely tried to do a good deed for the society, inspired by the publicity that surrounded my cause – it’s not for me to judge.
At this point I accept nothing but cold, hard facts that I could verify.
1. You don’t have the charities you said you have. I don’t care about semantics or legal terms or whether they are “in process or being” this or that… The fact is – you don’t have them now. You didn’t have them when you called me to arrange the concerts. By advertising the concert as FUNDRAISER for CHARITIES you mislead people and made me an unwitting participant in this deception.

3. You say you paid over 9000 in expenses for rentals etc in preparation for the concert.
I am yet to hear from Meeting House whether you made %100 nonrefundable deposit. But their rent for commercial and non-profit events is public information. It’s 1/10th of the number you named. Need I say more?
4. I spoke with Steinway and was told that: first of all you didn’t pay them. Second, you downgraded from a concert grand to a small piano without even asking me.
For me it’s enough “evidence”.
Please kindly request Ticketmaster to issue the refunds to the audience.
I will make a statement on Facebook about the cancelation.
I thank you for a hard lesson you gave me: I should be less trusting of people in a future, no matter how good their intents may seem.

« Maestro’s Tale: How Yo Yo Ma stepped up to play in my orchestra