The classical sales situation in the US has hit the pits. Aside from Andrea Bocelli, who trundles on at around 400 a week – cds and downloads combined – the best performer on Nielsen Soundscan was the Anonymous 4, chirping sweetly on a farewell tour with just 189 registered sales.

What does an artist have to do in 2015 to make a mark on the US market? 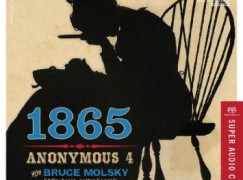 Not even American heritage sells.