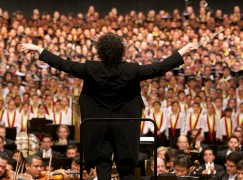 State-sponsored violence has struck at the heart of the music project.

Carlos Hernandez, 13, was killed by a criminal gang in the town of Cantaura, Anzoátegui state, while Jimbert Hernandez, 15, was caught in a shootout in the parish of La Vega.

How long before he speaks out?

A correspondent adds: Very often, after 10-12 hrs rehearsing until late at night, El Sistema players return home without any protection. Most often on the very dangerous public transport. Months ago, a key ES musician, told us that MANY of them had been kidnapped, but it was kept quiet. ES paid the ransoms.

« Peabody Dean: Conservatories do a bad job. We train musicians as if it’s 100 years ago.

Just what the BBC Proms need – the Jackson Five »