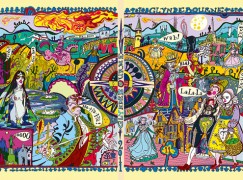 In a decidedly left-field appointment, the BBC have named David Pickard, general director of Glyndebourne Festival Opera, as the new controller of BBC Proms. Pickard, 55, used to run a period instrument orchestra before he went to Gly. He’s capable, personable, adequate to the task, clued in to the right networks. He comes from outside the BBC loop but he won’t make waves.

David Pickard has been appointed Director of the BBC Proms, it was announced today.

David, 55, is currently General Director at Glyndebourne and will take up his new role later this year, reporting to Alan Davey, Controller of BBC Radio 3.

Edward Blakeman, Director, BBC Proms 2015, will continue to lead the festival throughout this year’s season and ahead of David’s arrival.

Helen Boaden, Director of BBC Radio, says: “David has an outstanding track record in bringing new audiences to classical music, as well as a background in both orchestral and operatic music. I am absolutely delighted he will be working with Alan to build on the success of the BBC Proms. I would also like thank Edward Blakeman for leading the Proms with skill and flair as Director, BBC Proms 2015, and on delivering another excellent programme this year.”

Alan Davey says: “David comes from a background of musical excellence and exploration, and will bring a whole host of fresh ideas to help us ensure the greatest classical music festival in the world continues to provide the place for people to discover and rediscover the best classical music. His achievements at Glyndebourne have included the discovery of exciting new artistic talent and the establishment of a range of new initiatives to bring opera to wider audiences through Glyndebourne’s touring, education and digital activities.

“I would like to thank Edward Blakeman for his work bringing us this year’s season – one of huge musical depth which is proving to be a hit with audiences. He has done a superb job and deserves his place in the spotlight as the season takes us on the fascinating twists and turns we expect from a fantastic Proms season.”

David Pickard says: “I am honoured to be asked to take up the role of Director, BBC Proms, and to follow in the line of such distinguished predecessors. After 14 wonderful years at Glyndebourne, I count myself extremely fortunate to have the opportunity to lead another of this country’s most exciting arts organisations. Like so many people, my interest in classical music was inspired by visits to the Proms as a teenager and it has been my privilege to play a role as a contributor for the past 20 years, firstly with the Orchestra of the Age of Enlightenment and more recently with the annual Glyndebourne Prom. I look forward now to building on the founding principles of the Proms – to bring world-class classical music to the widest possible audience.”

« An eminent clarinettist is no more