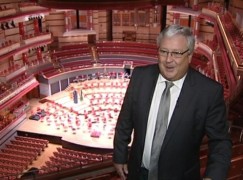 Andrew Jowett, who has run Birmingham’s Symphony Hall since it opened – and in tandem with the historic Town Hall – has just announced his retirement. He has been in the job for 28 years and created the most efficient and focused pair of concert venues in the country, with regular visits from the world’s great artists and orchestras.

Andrew Jowett said today: ‘It has been an enormous privilege to have been part of the team which created Symphony Hall – the greatest concert hall to be built in the 20th century – and then to re-open and manage Birmingham’s historic Town Hall following its £5million renovation in 2007.’

It will be a helluva job to fill.

Andrew Jowett has worked in the arts for over 30 years. On graduation from the University of Salford, he was appointed Assistant General Manager at The Crucible Theatre, Sheffield. From 1979-1981 Andrew was Director of Darlington Civic Theatre, and from 1982-1988 he was Director of the Arts Centre, University of Warwick. Since 1989 Andrew has been Director of Symphony Hall, Birmingham and is responsible for its artistic programming, operation, and management. From 2007 onwards, Symphony Hall and Town Hall Birmingham have been managed together under the company Performances Birmingham Limited and Andrew is now Chief Executive of PBL as well as retaining overall directorial responsibility for Town Hall & Symphony Hall.

Andrew is Chair of the British Association of Concert Halls, a former Council Member and Vice President of UK Theatre Association, and Chair of the Advisory Board for the Arena Theatre, Wolverhampton. He is a Trustee of the Young Musicians Trust, a Trustee of the Elgar Birthplace Foundation and Trustee of the Brant International Piano Competition. He is also a Member of the International Society for the Performing Arts and a Founding Member of the European Concert Hall Organisation (ECHO). Andrew is an Honorary Fellow of Birmingham City University and is a recipient of the Birmingham Civic Society Gold Medal, which is awarded to individuals who have made a significant contribution to life in the city. In June 2012 he was awarded the OBE in HM The Queen’s  Diamond Jubilee Birthday Honours for services to music.

« When concerts were fun….