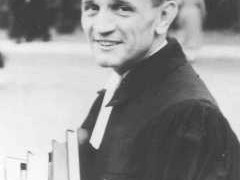 They tried to keep the election location a secret. In the past, it has been a rich man’s villa in the Berlin Woods.

Today, Austrian media are reporting that the 124 players have gathered at the Jesus-Christus-Kirche in Berlin-Dahlem to elect their next conductor.

The church has immense spiritual significance for Berliners. From 1931, it was the pulpit of pastor Martin Niemöller, one of the most outspoken Christian opponents of Nazism. Niemöller, who spent seven years in concentration camps, is the source of the moral exhortation to confront evil:

First they came for the Socialists, and I did not speak out—
Because I was not a Socialist.

Then they came for the Jews, and I did not speak out—
Because I was not a Jew.

Then they came for me—and there was no one left to speak for me.

UPDATE: A Berlin Phil spokesperson has said she does not expect a result before 4pm, and that there are no toilets for journalists in the vicinity.