‘Be glad for Gergiev that he can earn 340 million’

Reactions in Russia to the latest glasnost on cultural earnings has been a curious mixture of envy and pride.

According to Valery Gergiev’s tax declaration, he owns three plots of land, six apartments, one cottage and two cars, in addition to a tax-year income of 340m rubles, just under seven million US dollars.

Some politicians grumbled that it was unfair for a music director to rake in so much when wages across the cultural sector fell last year by 40 percent.

But a director of the Institute for Social Policy, one Sergei Smirnov, took an aspirational view: ‘For God’s sake, if the maestro can earn 340 million, one should only be glad for him. I don’t understand why this (fuss) is necessary.’ 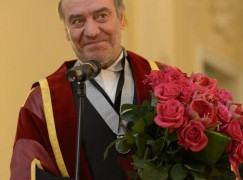