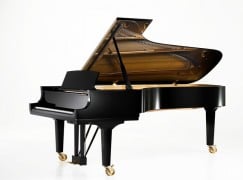 He is launching a piano that combines the power of modern instruments with the transparency of the kind that Liszt played on (coincidentally, I had just contemplated the same topic in a Standpoint essay). Here’s the press release:

Daniel Barenboim unveiled a ground-breaking new piano at a special event at London’s Royal Festival Hall today (12 noon, 26 May, 2015), in advance of his Schubert recital series there.

Conceived and commissioned by Barenboim himself, the Barenboim-Maene Concert Grand piano was developed and built by esteemed Belgian instrument maker Chris Maene, with support from Steinway & Sons.

The new Barenboim-Maene piano combines the touch, stability, and power of a modern piano with the transparent sound quality and distinguishable colour registers of more historic instruments. While on the outside it does not differ significantly in looks from a modern concert grand, most of its components – including the braces, soundboard, cast-iron frame, bass strings, keyboard and action – have been specially-designed and tailor made, and the positioning of others, such as the hammers and strings, is radically different.

Barenboim was inspired to create a new piano after playing Franz Liszt’s restored grand piano during a trip to Siena in September 2011. Struck by the vital differences in sound of an instrument constructed with straight, parallel strings rather than the diagonal crossed ones of a contemporary instrument, he set out to create a brand new instrument that combines the best of the old and the new and offers a real alternative for pianists and music-lovers in the 21st century.

Barenboim discussed his idea with Steinway & Sons who introduced him to Chris Maene, who had also wanted to create a brand new instrument inspired by the past. The two maestri were able to combine their respective musical and technical expertise to begin work on their shared vision. Just 15 months ago, Barenboim’s personal technician Michel Brandjes tested several 19th-century historic grand pianos from Chris Maene’s collection and some of the remarkable replicas made by him. His findings and reflections on the sound and technical aspects of the instruments were discussed with Barenboim who then commissioned Maene to work a detailed concept for the new instrument which was then developed, constructed, tested and revealed today.

“The transparency and tonal characteristics of the traditional straight-strung instruments is so different from the homogenous tone produced by the modern piano across its entire range. The clearly distinguishable voices and colour across its registers of Liszt’s piano inspired me to explore the possibility of combining these qualities with the power, looks, evenness of touch, stability of tuning and other technical advantages of the modern Steinway. I am so delighted to have worked with Chris Maene, who had the same dream and I must pay tribute to his incredible technical expertise and his deep respect for both tradition and innovation. I must also thank Steinway & Sons, for bringing us together and for delivering key components for our new instrument, thus enabling a perfect match of the traditional qualities and modern advantages.”

“All my life I have been building replicas of legendary historic instruments. But for many years I have also been dreaming of building a new type of concert grand. It has always surprised me how the fantastic and unique sound diversity of the grand pianos of the 19th century disappeared. By the end of the 19th century many piano builders tried to copy the success of Steinway & Sons. In this process, they all ignored the straight-strung grand pianos with their unique sound characteristics. As a result, the 20th century offered us very similar instruments in regards of construction and sound. Therefore it has never been my goal to build another copy of a Steinway, but rather to make a different instrument in which I could incorporate all my expertise about building historic instruments. It has been a true honour to be able to work with Maestro Daniel Barenboim. I hold the Maestro in very high regard and was delighted to discover our mutual interest in straight-strung pianos. His input, confidence and order made it possible to build this new instrument: a concert grand for the 21st century. For me it is truly a dream come true.”

Another dumb list of ‘best’ music colleges, this one from the Guardian »