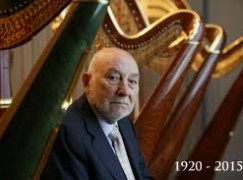 A legend among harpists has died

Victor Salvi, harpist of the NBC Symphony under Toscanini, has died at the great age of 95.

Chicago born, he opened a harp workshop on W54th Street in New York before migrating in 1955 to Italy, where he became one of the foremost harp makers. In 1987, he bought out his main US competitor.

Ever an advocate for the harp, he sponsored many recordings, concerts and competitions.

The angels are unlikely to permit him much rest.

« How Europe may help US orch to broadcast from Cuba