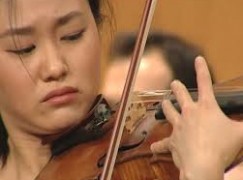 Someone mentioned that a violinist I was chatting to at dinner was a Yotube sensation with her 2011 recording of the Tchaikovsky concerto, conducted by Yuri Temirkanov.

Sure enough, Sayaka Shoji has racked up almost six million views for a performance that is intense, individual, exceptional in every desirable way (though I suspect she’d rather be playing the Ligeti).

So why isn’t Sayaka getting the big limelight dates in London and New York?

Thrills and spills (mostly spills) of the music business.

« Maestro stays: Some stability for Paris