The amazing life and tragic death of Bolshoi’s American leader

Russia’s Classical Music News has a fascinating article on Leon Zaks who, born in Canada of Russian-Jewish parents based in Detroit, was taken back to the USSR after his father joined the American Communist Party.

Leon’s music education began in Moscow at age seven. He went on to study with David Oistrakh before landing a seat in the Bolshoi orchestra and eventually being promoted to concertmaster. He was, for many, the very essence of Moscow’s musical sound.

And then he went on vacation to Greece…. Read here (in Russian). 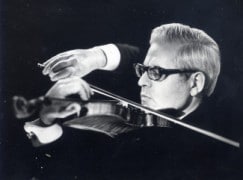