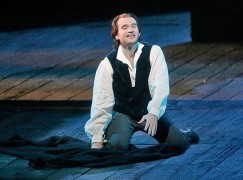 Tenor deputised at the Met with blood coursing down one cheek

Michael Fabiano stood in last week at the Met on less than seven hours’ notice after Joseph Calleja – the Edgardo in Lucia di Lammermoor – called in sick.

Fabiano, who caught a train in from Philadelphia, told reporters he had never seen the Met production, let alone rehearsed it. Now he has told the Telegraph newspaper that, unfamiliar with the stage, he suffered a serious accident.

‘I ran off stage and ran into a dark area and hit my head into a light, and really hit the deck,’ he said. Medics had ten minutes to patch him up before he was on again for the tragedy’s climactic scene.

There was blood on his face in the closing scene. According to the Telegraph, it can be seen in Ken Howard’s production picture, below.

Is the Met safe enough for singers?

Kent Nagano: ‘Classical music could be gone in a generation’ »