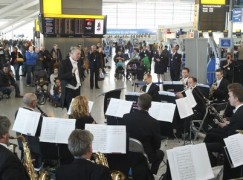 Some 40-odd musicians of the Svetlanov State Symphony (artistic director Vladimir Jurowsky) were taken off a plane at Heathrow and held for ten hours in a waiting room after a British Airways pilot called the police.

The orchestra was on its way to Sao Paolo, Brazil, and the flight was severely delayed.

The circumstances of incident are not yet clear, but it appears there were suspicions of drunken conduct.

British Airways have told Russian media that the musicians were removed ‘due to technical difficulties’. They were put on the next available flight.

Here is a Russian video report.

UPDATE: One passenger’s Facebook comment: ‘Late departure due to a bunch of pissed Russians being escorted off the plane……’

UPDATE2: On Sunday evening, the orchestra issued the following statement:

On 9 April 2015, the musicians of the State Academic Symphony Orchestra “Evgeny Svetlanov”, divided into two groups, were on their way to a concert tour of countries in South America. One group was on an Air France flight with a connection in Paris; the other took a British Airways flight with a connection in London. For unclear reasons, the latter group, consisting of 40 orchestra members, was removed from the British Airways flight at London’s Heathrow Airport. After a 15-hour wait, the incident was resolved and the musicians were put on the next flight to Rio de Janeiro, then they were taken by bus to Sao Paulo. At the moment, all of the State Academic Symphony Orchestra “Evgeny Svetlanov” musicians are in Sao Paulo, where today, April 11, they will play the first concert of their tour schedule. We are pleased to confirm that all scheduled concerts in Sao Paulo, Buenos Aires, Rosario and Santiago will take place as scheduled and that there will be no program changes.

The administration and staff of the State Academic Symphony Orchestra “Evgeny Svetlanov” express heartfelt gratitude to the representatives of the Russian Embassy in the UK, as well as to the Police and Immigration Office of Heathrow Airport for their assistance and attention to the musicians who found themselves in a difficult situation.

Brum’s beloved Bone will be laid to rest on Wednesday »