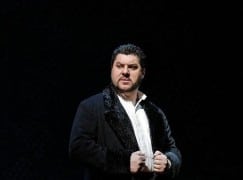 Placido Domingo gets replaced at the Met

Luca Salsi stepped in as Don Carlo in Verdi’s Ernani on Satirday after the Spanish singer failed to overcome a cold.

NEW YORK (AP) — Luca Salsi was at the corner of Broadway and 72nd Street, taking a walk with his wife, when he got a call from Alvaro Domingo, son of the famous singer.

Salsi had 30 minutes to make the nine-block trip to the Metropolitan Opera, get in costume and replace Placido Domingo as Don Carlo in Saturday’s performance of Verdi’s “Ernani,” which was broadcast on radio around the world.

Salsi already was scheduled to be on the Met stage that night to sing Enrico in Donizetti’s “Lucia di Lammermoor.”

He had a quick telephone chat with Met music director James Levine, whom he had never met, got in costume and went on stage in time for Don Carlo’s first-act entrance.

The 40-year-old baritone from Parma had no chance to review the score….

Salsi had last sung the role in Rome in December 2013 with conductor Riccardo Muti.

“When you do something with maestro Muti, after you will remember very well the score,” Salsi said.

A leading Spanish composer has died »