The orch announced its new season this morning. Rattle will conduct a Beethoven cycle six times over as part of his heavy schedule of 64 concerts and 10 opera performances. 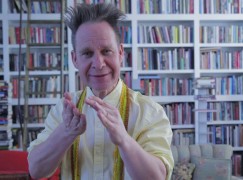 The Berliner Philharmoniker will present a total of 123 symphony concerts and 10 opera performances during the 2015/2016 season:

83 concerts in the Philharmonie with

4 concerts at the Easter Festival in Baden-Baden

4 opera performances at the Easter Festival in Baden-Baden

Philharmoniker, including 30 concerts and 6 opera performances in Berlin, plus 31 concerts on tour

as well as 4 opera performances and 4 concerts at the Easter Festival in Baden-Baden.

The focus of the season will be the cycle of the complete symphonies of Ludwig van Beethoven, which

it on tour. The complete cycle will be performed in Vienna, Paris, New York and Tokyo, with single

concerts in Frankfurt am Main and Taipei.

Another emphasis, which will extend over the entire season, is French music from Lully to Boulez.

Along with Sir Simon Rattle, many of the guest conductors will also present French repertoire.

The Berliner Philharmoniker Foundation has again invited guest orchestras for the 2015/2016 season:

45 concerts will be presented in the Kammermusiksaal featuring soloists and ensembles, including

ensembles. 14 chamber concerts will also be given in the Philharmonie, including 3 Late Night

42 Lunch Concerts will be given in the Foyer of the Philharmonie on Tuesdays at 1:00 pm.

The series Jazz at Berlin Philharmonic continues in its fourth season with 4 concerts.

Residence during the 2015/2016 season. The director has maintained a close association with the

orchestra since 2010; in particular, their intense collaborations on the St Matthew and St John Passions

Foundation during the coming season. Please see the attachment for a detailed biography and further

information on the concerts.