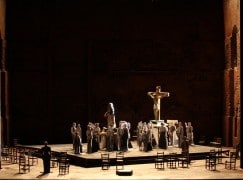 Those perennial soul mates, CAVALLERIA and PAGLIACCI, got a bit trampled lady night by a concept that set them both in the same Sicilian village, but about 50 years apart. David McVicar’s opulent production, making full use of the Metropolitan’s turntable, worked rather nicely in CAV and bombed disastrously in PAG.

From the start, in CAV, it was Santuzza’s show, and she never left the stage.  The attractive Dutch soprano Eva-Maria Westbroeck, threw herself into the proceedings with her usual sincerity and commitment. She often was upstaged by chairs that were not only omnipresent, but had to be moved by choristers, and the ever revolving turntable stage.  It was fun to watch, and the black and white costumes made a statement of what I don’t know, but it was eye-filling. During the ravishing Intermezzo, McVicar had the choristers carry candles and it was a beautiful sight to behold.  Westbroeck has a genuine dramatic soprano, and she is an honest singer, so there was no lunging into chest voice, and none of the excesses we associate with verismo.  But when she flung out her huge soprano, it often had a decided wobble.  This was an A-for-effort endeavor, but idiomatic it wasn’t. The other singers, Marcelo Alvarez and George Gagnidze, both tried to approximate Italianate singing with varied results.

The tenor and the baritone were back in PAG, in a production that was so tawdry and vulgar it was actually depressing.  Joining them was Patricia Racette, who played Nedda like a has been hooker, and sounded like an over-the-hill soprano.  There were lots of vaudeville touches, many of them unnecessary, and McVicar cast Canio as a drunk, adding to the coarseness of the proceedings. I cringed during the play-within-the-play scene, it was so unsympathetic. Alvarez gave it his all, which I would rate as B, and Gagnidze threw out huge high notes in a strangulated voice. Many of the secondary singers were lovely.

In the pit was Fabio Luisi, the only Italian around, but you’d never know it.  He conducted both operas with restraint, polish and finesse. The orchestra played beautifully. But where was the passion?  Sorely absent.  Worst of all, Luisi kept the magnificent Met chorus in check, but even his wrong-headed subtlety, couldn’t keep those wonderful singers down.

UPDATE: And another half-half review here from Elizabeth Frayer and Shawn E Milnes. Apparently, the mule had vocal problems and the Met couldn’t find a stand-in.

« Music prof goes to war over forced retirement at 65