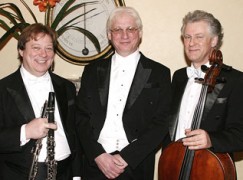 In praise of the orchestral pianist

Gareth Davies, principal flute of the London Symphony Orchestra, has written a beautiful portrait of his colleague, John Alley, who has reached retirement age.

Do not miss the video clip where John downs a pint while playing a Shostakovich cadenza at the BBC Proms.

UPDATE: Message from John Alley: Flattered as he is to receive a plethora of kind comments and messages, John Alley would like to announce that HE HASN’T RETIRED. Because of LSO rules he is no longer Principal Keyboard Player. He is still available through the normal channels. Many Thanks. J. A.

« A Bach legend remembers her day of liberation, 70 years ago