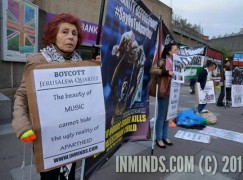 Hall is to blame for London’s latest concert disruption

The ugly political eruption at Friday night’s Jerusalem Quartet concert could and should have been prevented. The Quartet are a regular target for a small, known group of disrupters. The Wigmore Hall, where they usually play, have taken measures to exclude those noise-makers and, if one slips through, to eject the agitator with minimum fuss and force.

The Queen Elizabeth Hall was wantonly unprepared for the eventuality.

‘The hall had lots of security guards on the outside, fussing around with walkie talkies, but no security measures at all – no bag searches or anything, and lots of different doors to the foyer. When the shouting started (in the Minuet and trio of the Mozart) a couple of ushers went up to the guy and must have asked him to leave but he just kept going and the woman joined in. It took a minute for a lady with a walkie talkie to come by but she didn’t seem to be able to do anything either. None of the security guards from outside came in. A guy from the audience walked up to them and started getting angry with them. I’m not entirely sure what happened at the end but it looked like they were gently prodded out.’

Ariane adds: ‘The players kept their focus brilliantly, though, and  it was a superb concert – possibly the best quartet playing I’ve heard live.’

Which musicians are running in the London Marathon? »