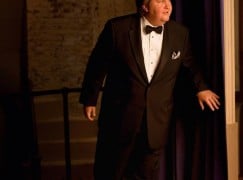 ROCHESTER, N.Y.—Grammy-winning tenor Anthony Dean Griffey, whose signature roles include Peter Grimes, and lyric baritone Jonathan Retzlaff, associate professor of voice at the Blair School of Music at Vanderbilt University, have been appointed to the faculty of the Eastman School of Music of the University of Rochester.

Griffey, whose upcoming engagements include the U.S. premiere of The Road of Promise with The Collegiate Chorale at Carnegie Hall, appearances with the Atlanta Symphony and The Philadelphia Orchestra as well as returning to the Sao Paolo Symphony for performances of Gurrelieder, and bringing his celebrated interpretation of Of Mice and Men to Canada for the first time, will continue to perform while taking on teaching responsibilities as Professor of Voice. Griffey received a Performer’s Certificate and his Master of Music degree at Eastman.

“I’m very excited to be coming back to Eastman in this role,” said Griffey. “Eastman has always held a special place in my heart from the time I was accepted to study with John Malloy. It is a collegial and supportive place for students who come to work and learn, with tremendous camaraderie among the faculty. I love to teach, and to teach and continue to perform is to combine both of my loves.”

Griffey is acclaimed for his dramatic interpretation as well as his powerful lyric tenor voice, and has performed on opera, concert, and recital stages around the world. He debuted the title role in Britten’s Peter Grimes at the Tanglewood Festival in 1996 under conductor Seiji Ozawa and then went on to sing the role at The Met, Opera Bastille, Santa Fe, Glyndebourne, Houston Grand Opera, San Diego Opera, Canadian Opera Company, and the Aspen festival.