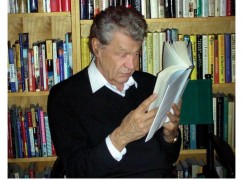 We have been notified of the death of Andrew Porter, foremost music critic in an age of formidable critics and one of few whose reputation spanned both sides of the Atlantic. Andrew was 86.

South Africa born, Andrew was chief critic of the Financial Times from 1953 to 1972, earning the paper impressive cultural credentials on very little space.

From 1972 to 1992, with one year’s break, he was music critic of the New Yorker, establishing a style that was instantly recognised for a prosaic opening that parted like a curtain to reveal true content.

A quiet man, usually seen alone, he was close to his sister, Sheila, a busy New York publicist.

When I was writing Covent Garden: The Untold Story, Andrew was helpful in elliptical, though discreet, ways. His employer at the FT, Lord Drogheda, was also chairman of the Royal Opera House. Andrew, when he wrote a harsh review of a Covent Garden production, would receive a Droghedagram before breakfast. He gave back as good as he got. The mutual respect between and opera boss and a critic, as seen through their correspondence, was exceptional, possibly unique.  Halcyon days.