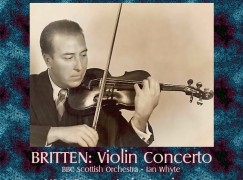 Despite the Stradivarius, the concerto was a flop

Another fascinating essay has popped up on the Cozio site, illustrating how and why Benjamin Britten’s violin concerto took more than three decades before soloists stopped sniffing at it.

The March 1940 premiere in New York was not too badly received, but Britten was in bad odour back home for fleeing the country before war broke out and hostile British reviews virtually buried the piece for a generation.

When he premiered the Britten Concerto, (the Spanish violinist) Antonio Brosa had relatively recently acquired the c.1730 ‘Vesuvius’ Stradivari. For some reason its previous owner, the Canadian player Jan Hambourg of the Hambourg Trio, had kept it for only a year in 1937–38. Brosa hoped to make a solo career in America with it.

That didn’t work out. The Vesuvius Strad is now in the town collection at Cremona.

« Please come to my recital…