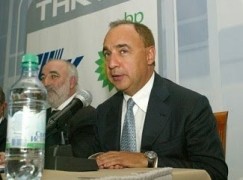 Not because he loves music, necessarily. Owning a record label no longer makes you rich.

But Warner owner Len Blavatnik, 57, who tops the Sunday Times Rich List with £13.17 billion, is known to have some cultural interests. He was among four backers, for instance, of the movie Woman in Gold, a tale of post-Nazi art restitution, and he is said to be a huge fan of Fiddler on the Roof.

He bought Warner for $3.3bn, a rather small part of his fortune, and goes around telling people, ‘I bought a record company at the wrong time.’ His ambition for Warner: ‘Even though it’s the music business, it’s still business.’

Born in Odessa, he described his boyhood in Russia as ‘this little Jewish kid, walking around with a violin case’.

« A countertenor gets engaged