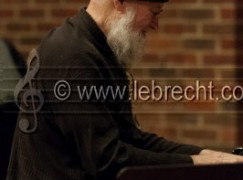 The composer of ‘In C’, arguably the simplest piece of music since scores began, is to be awarded a doctorate by his alma mater, the SanFranCon.

Press release: The San Francisco Conservatory of Music will grant Terry Riley, one of America’s most influential living composers and a former Conservatory student, the honorary degree of Doctor of Music at this year’s commencement ceremonies. With his landmark minimalist work In C, Riley pioneered a compositional style that has influenced everything from chamber and orchestral music to rock and roll. An artist who continues to inspire new generations of musicians, Riley was honored at SFCM last January with a concert of premieres written for his 80th birthday and at the recent Switchboard Music Festival with a rendition of In C rewritten as a tribute and performed by numerous Conservatory alumni. Riley will help send off the class of 2015 in ceremonies held at 10:30 a.m. on May 22 in the Conservatory’s Caroline H. Hume Concert Hall.

President David H. Stull says the Conservatory is privileged to honor Riley as a role model for this year’s graduates. “His work as a composer is clearly extraordinary, but more important is his impact on musicians and the art form itself. The music of our century would be demonstrably different in his absence; this truth is both a rare phenomenon and a monumental achievement, the full measure of which will not be known for generations to come. He is a remarkable individual and we are proud to honor him as an alumnus and friend.”

New book: The Met’s heading the way of City Opera »