A Toronto hall has booked Valentina Lisitsa for 2016

Koerner Hall, the finest acoustic venue in Toronto, has a concert booked with Valentina Lisitsa in April 2016.

Its executive director, Mervon Mehta, is not the kind of guy to buckle to lobby-group pressure. Lisitsa says she intends to continue tweeting about the Ukraine situation, supporting the Putin position.

The issues of freedom of performance and freedom of expression will return to Toronto a year from now. 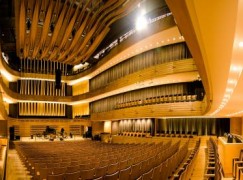