A maestro asks: Does a woman concertmaster change my orchestra?

Among volumes of responses to our groundbreaking survey of woman concertmasters comes one from a well-known music director who wonders whether there is an appreciable difference when his orchestra is led by a woman, or a man. This particular maestro has a woman concertmaster at his orchestra, and his question is offered in the soirit of honest inquiry.

So what do our readers think? Especially the concertmasters among you.

And the conductors, of course. 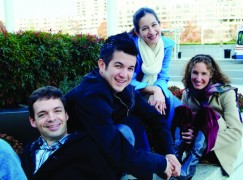