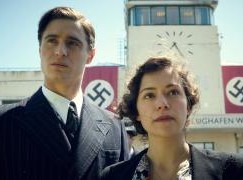 In December 1935, Arnold Schoenberg was approached in Hollywood exile by Irving Thalberg to write music for his film of Pearl Buck’s The Good Earth. Schoenberg was penniless, Thalberg fairly cultured for a movie mogul. There are two versions of what happened at the meeting. In one, Thalberg mentioned hearing Schoenberg’s ‘lovely music’ in a broadcast concert. The composer flashed back:  ‘I don’t write lovely music.’

In the other version, Thalberg began to describe a scene, a hurricane in a field where the heroine, pursued by her enemies, was giving birth. ‘With all that going on,’ said Schoenberg, ‘who needs music?’

It was not a meeting of minds.

Last night, ignoring indifferent UK reviews, we went to see Woman in Gold, which includes half a minute of Schoenberg’s music – Verklärte Nacht – being played in a Hollywood film. It was a reconciliation, of sorts.

The film was much more powerful than the reviews allowed and culturally authentic. The script was exceptionally authentic and Helen Mirren was flawless as the elderly emigrée aunt. The film relates the campaign of Schoenberg’s lawyer grandson, Randol, to claw back a Nazi-stolen Klimt painting from the Austrian Government. He wins, they lose. Out of the winnings, Los Angeles got a Holocaust Museum and LA Opera a huge endowment.

We spotted just one musical anomaly. On her flight from Vienna with her opera singer husband (played by Max Irons), the young heroine (Tatiana Maslany) tells a Nazi airport official that he has been summoned as a substitute to Cologne Opera by…. pause for celebrity effect…. Herbert von Karajan.

At the time of the Anschluss in March 1938, Karajan was barely known outside Aachen, where he was the young Generalmusikdirektor. It was not until he conducted Tristan und Isolde at the Berlin State Opera in October 1938 that the Goebbels press crowned him Das Wunder Karajan and his fame was made.

Please come to my recital… »