Some trenchant reflections from Dana Fonteneau: 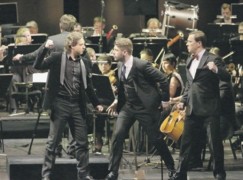 Here’s the thing.  95% of what I hear when talking with other musicians, regardless of whether it’s in a personal or professional capacity, is negativity and criticism.  Here’s a list of things I’ve heard in just the last three days.

It goes on and on.

So they booked an orchestra and set out to sea, in search of a humpback whale. 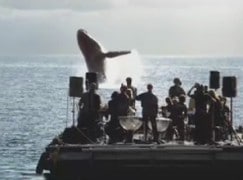 And here’s how they made it (you can skip the adman jargon at the end).

Oliver Schneller will also be director of the Computer Music Center at Eastman School of Music. 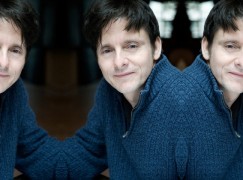 Oliver Schneller, who has directed and curated festivals and collaborative arts projects over the course of his wide-ranging career, has been named Professor of Composition and Director of the Eastman Computer Music Center at the Eastman School of Music.

Born in Germany, Schneller grew up in Africa, Europe, and Asia and studied in Germany and the United States, and his works reflect his interest in all aspects of interculturality in music. He is the recipient of such prestigious honors as Harvard University’s Paul Fromm Award, the Tanglewood Music Center’s Benjamin Britten Memorial Fellowship, the Rome Prize Fellowship, the Ernst von Siemens Music Foundation’s Composers’ Prize, and more.

“We are delighted that Oliver Schneller will join our composition faculty and look forward to a new and exciting chapter for the Eastman Computer Music Center under his stewardship,” said Carlos Sanchez-Gutierrez, chair of the composition department. “Oliver is an erudite and versatile composer whose music combines elegance and clockwork precision with expressive depth.  He is a true global composer, with interests that include the music of Europe, Japan, and the Middle East, as well as inter-arts work and new technologies.  He is also a gifted and inspiring teacher and mentor, and has spearheaded a number of innovative projects for new music in the United States, Germany, Japan, and elsewhere.”

As a saxophonist, Schneller has performed with ensembles such as the George Russell Big Band, the Gustav Mahler Youth Symphony under Seiji Ozawa, and the Tanglewood Music Center Orchestra as a soloist in Tan Dun’s Red Forecast. He also has worked with various jazz and improvisations ensembles in Cologne, Paris, Amsterdam, Boston, and New York.

Schneller earned degrees at the University of Bonn and the New England Conservatory of Music, as well as the Doctor in Musical Arts degree in composition from Columbia University.

Word is tweeting out that the BBC has booked a German soloist for Last Night of the Proms.

No problem with that, until you get to the last number but one.

Not so much *how do you sing Rule, Britannia in German, as how does a German give credence to British rule?

Think of all those Unions Jacks.

Think what Angela Merkel will make of it. 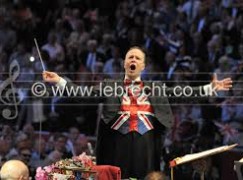 The silliest piece of the Sibelius year, so far.

A London critic didn’t like the Berlin Philharmonic performances of the Sibelius symphonies because they’re not what he’s used to. So he concludes they cannot be right.

Then the critic equivocates a bit before deciding that the performances paid ‘little heed to the spirit of a score.’

As if that can spirit be defined, bottled and marketed as authentic.

Music in print is an approximation of an imagined sound. Interpreters exist to make sense of it, according to their own lights – northern or otherwise.

Read here. Sad to see such nonsense in the Strad, and from a former Gramophone writer. 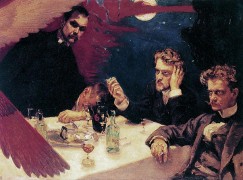 Scott Pingel has been appointed associate professor of music at the University of Michigan, starting this fall. He’s taking leave of absence from the San Francisco Symphony and the SF Conservatory to test the winter, but San Fran may soon have a big seat to fill. 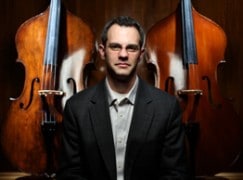 Some 88 percent of singers and conductors at English National Opera next season are either British, British trained or UK resident. It says so in the press package.

But 88% is not enough for Rupert Christiansen in the Daily Telegraph, fulminating here of treason.

We were particularly struck by the Triastan and Isolde cast, which has a Skeltonand a Melton; a Cargill and a Colclough not to mention an English Rose. Must be fun being an ENO casting director. 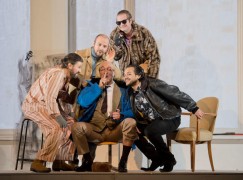 Anish Kapoor designs a new production of Wagner’s Tristan and Isolde, directed by Daniel Kramer with Stuart Skelton and Heidi Melton in the title roles and British bass Matthew Rose as King Mark

Hei-Kyung Hong, a regular at the Metropolitan Opera ever since winning its 1982 auditions, has declined a request to become head of Korea National Opera. The company has been in crisis since Regina Han quit after 53 days in February, forced out by a politically inspired media campaign.

Hong said she’s under-qualified. KNO is running out of options. The Seoul Philharmonic is in similar crisis, as is the KBS Orchestra.

Korea is now a no-go zone for music management. 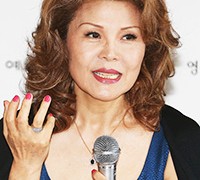 This is David Heiss on CNBC today, and he’s playing the future. 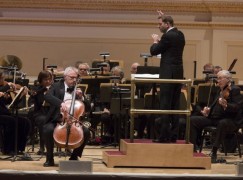 Daniel Barenboim was awarded the Elgar Medal at the Royal Festival Hall last night after performing the second symphony with the Staatskapelle Berlin.

He was heard wondering afterwards whether any other foreign orchestras dared to play Elgar in London.

Just so happens Simon Rattle has announced he is bringing the Vienna Philharmonic to perform Dream of Gerontius in Birmingham this September.UPDATE: And at the penultimate night of the BBC Proms.

The Menuhin Competition London launched this morning on Yehudi’s 99th birthday. The Mayor of London is right behind it (or so it says) and part of the first prize is a prime Stradivarius violin.

On loan for a year.

The MENUHIN COMPETITION LONDON 2016 opens for entries today, calling exceptional young violinists worldwide to apply. The 22 April 2015, would have been legendary violinistYehudi Menuhin‘s 99th birthday – and his legacy lives on with the exceptional talent that will be on display when the world’s leading violin competition for players under 22 years returns to London in April 2016.

Mayor of London, Boris Johnson says: “It’s wonderful that the prestigious Menuhin Competition is coming back to London in 2016, the centenary year of the great maestro. This exciting showcase of some of the best violinists from across the globe will be a feast for music fans.“

Artistic Director Gordon Back says: “Five of this year’s nine jurors are former Menuhin Prize winners and internationally acclaimed performers; they are testament to the difference this competition can make to a young musician’s life.” The jury of world class soloists is chaired by American violinist Pamela Frank; and former laureates on the jury are Julia Fischer, Ray Chen (who will also be the youngest ever juror of the Competition), Tasmin Little, Ning Feng and Joji Hattori. Menuhin’s son, pianist Jeremy Menuhin, Korean violinist Dong-Suk Kang and director of the Verbier Festival Martin Engstroem complete the line-up.

Prize Winners of the MENUHIN COMPETITION LONDON 2016 will immediately find themselves centre stage performing at several major international classical music festivals including the Homage to Menuhin festival of the Konzerthaus Berlin, playing three concerts with the Konzerthaus Orchestra in late April 2016. In addition to cash prizes, the Senior 1st Prize winner will receive a 1-year loan of a golden period Stradivarius by J&A Beare and the 1st Prize Junior winner receives a 1-year loan of a fine old Italian violin by Leonhard’s Fine Violins.

To celebrate the Centenary of its founder, repertoire for the MENUHIN COMPETITION LONDON 2016 is themed around works closely connected with Yehudi Menuhin, from Bela Bartok’s notoriously difficult solo sonata written for Menuhin in 1944 to music by his great mentor and teacher George Enescu. Fostering the creation of new music, the competition is commissioning new works for violin by Roxanna Panufnik and Oscar Colomina i Bosch to be premiered during the event.

Based on a survey among the world-record breaking number of entries to the last competition, the MENUHIN COMPETITION LONDON 2016 introduces online applications for the first time this year, www.menuhincompetition.org. General Manager Susanne Barthelmes says: “It has been the most wanted improvement suggested by the young musicians and it has always been our priority to enable easy access to the competition from all parts of the world.”

Application deadline for the Menuhin Competition London is 31 October 2015.

The MENUHIN COMPETITION LONDON 2016 is hosted by the Royal Academy of Music and presented in partnership with the Philharmonia Orchestra, Southbank Centre and Yehudi Menuhin School and in association with the National Youth Orchestra of Great Britain, Orpheus Sinfonia, Jewish Music Institute and Live Music Now.

The MENUHIN COMPETITION LONDON 2016 gives the opportunity to exceptional young violinists from around the world to  be part of an uplifting and highly enjoyable experience – including meeting (perhaps for the first time) and forging lifelong friendships with their fellow violin prodigies.

It’s a promising season, but the most novel aspect of it was that, after opening statements, the new head of media decided that there would be no questions. Participants could mingle instead with directors over coffee for the purposeful exchange of views. A good idea in principle, but when I asked Ms Pollock how the money would be raised with the Arts Council turning off the taps I got a pre-cast McKinsey statement that she must have given to the board.

In an open q&a, I might have challenged her with a supplementary question, but in this format I just gave up. Stick to proper press conferences in future is my conclusion.