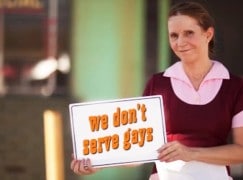 The chief executive of the Indianapolis Symphony Orchestra has struck an alarm bell about the state’s new law of religious and sexual intolerance. Gary Ginstling published this open letter tonight:

As the Chief Executive Officer of the Indianapolis Symphony Orchestra, I want to reaffirm our institution’s commitment to inclusiveness. The ISO does not discriminate in its hiring of staff, orchestra, musicians or guest artists, and our performances and programs are open to all.

The recent passage of the Indiana Religious Freedom Restoration Act has brought unnecessary negative attention to our state and its citizens. In addition, the economic damage of this legislation is real. Several world-renowned guest artists scheduled to perform with the ISO in coming months have expressed concerns about coming to Indiana in the future. The ISO is committed to providing our community opportunities to experience the most talented performers from around the world; that any artist might choose not to perform with us due to this legislation is but one example of its far-reaching consequences.

At a time when the nation’s attention is focused on Indianapolis this week as we host the NCAA’s 2015 Final Four Men’s Basketball Championship and our city’s unique personality and hospitality will be on display, it is a shame that the divisiveness of this legislation has become the headline. And given these headlines, it is important that the Indianapolis Symphony reiterate its commitment to inclusiveness and to the value and benefit of a diverse community.

UPDATE: The President of Indiana University adds his voice to the growing concern here.

After Tannhäuser, the Kremlin moves to control opera repertoire »