Dominique Meyer has announced an opera on Virginia Woolf’s Orlando by Olga Neuwirth, due in December 2019. 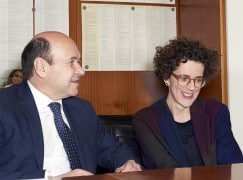 The composer says: ‘Ever since I was a child I have always been interested in everything, from arts to politics, sciences to human psychology. Passionate towards everything. I let myself be inspired in the same way by the small and big things that the world has to offer, by the wonderful diversity of life, and that is something that I see reflected. The essence of this fictional biography is the love for oddities, the supernatural, deceit, virtuosity, exaltation andexaggeration. It’s also about remembrance, about a sophisticated form of sexual allure and against the restraint toward a single gender. Another important topic is also the refusal to be patronised and to be treated in a condescending way, which is something that happens over and over again to women and will keep on happening. Virginia Woolf questioned the roles of man and woman, the status of women in society and their approach to literature. My musical theatre won’t be about a theoretical proof, but about different possibilities that unfold – also musically – scene by scene. For me Orlando and music are very similar: through the centuries the story of Orlando conveys, in the same way as (classical) music, on the one side the bittersweet pain that goes beyond words, and on the other hand the precise structures, proportions, abstraction and mathematical-scientific thinking and solace. Each life arises from a process of self-creation. As we live, we create our own world. In the same way as we do with music, or with and through Orlando’.