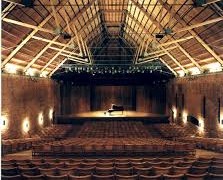 Summit of the Britten Empire

Aldeburgh Music, Benjamin Britten’s legacy, has revealed that it is about to acquire the concert hall and heritage complex the composer caused to be built at Snape Maltings. It is Roger Wright’s first big move since he joined Aldeburgh from the BBC last year. Press release below.

The owners of Snape Maltings, the Gooderham family, have announced today that they are in

commercial portfolio. The sale, which is significantly supported by funds from Arts Council

buildings which have yet to be restored. Aldeburgh Music’s campus currently includes Snape

Maltings Concert Hall, the Hoffmann Building – which houses the Britten Studio – the

Britten–Pears Building and the Dovecote Studio.

The combination of Aldeburgh Music’s world-class, year-round arts programme and the

Suffolk residents and visitors to the county.

Aldeburgh Music for nearly five decades, since George Gooderham bought the site in 1965 and

Snape Maltings Concert Hall. The most active period of collaboration has taking place from

2006: since then the Maltings masterplan has seen a further 30% of the site redeveloped,

which has included the opening of Aldeburgh Music’s Hoffmann Building, the House & Garden

the vision of its founder, Benjamin Britten, by engaging the entire site, will ensure that the

spirit and unity of Snape Maltings is maintained.

endowment, the receipt of an individual donation, and a vital £2m contribution from Arts

Council England’s grant in aid from DCMS and can only be used to buy capital assets, buy

“Without exceptional funding and support from Arts Council England, it would not have been

future of the Snape Maltings site. Owning the whole site opens a myriad of possibilities,

engagements. While creating a new source of income for Aldeburgh Music’s artistic

programme, we have every intention of building on Johnny and Alesha Gooderham’s inspired

work to preserve Snape Maltings and develop it as a destination venue. I look forward to an

audiences and the arts in general, and am particularly grateful for the support of the Arts

Council at this significant time in the history of Aldeburgh Music.”

Johnny Gooderham, Managing Director and owner of the Maltings, said:

“I have been fortunate to have been responsible for the Maltings since the age of 24, during

which time the site has seen its most extensive period of development. It is gratifying to see

interests, from the cyclists who visit our teashop to the customers in our shops and galleries

and the walkers who enjoy this unique landscape. This is a most natural unification of two

great assets and it will secure a robust and captivating future for the Maltings.

It is important that the recognition for the achievements to date is shared amongst our staff,

Aldeburgh Music is now the most natural custodian to take the Maltings forward. By

combining the existing aspects of music, visual arts, food and drink, festivals and heritage, we

have every confidence that Aldeburgh Music will deliver an enriched future for the site.”

purchase of Snape Maltings’ retail and residential buildings. It will ensure that Aldeburgh

Alan Britten, nephew of Benjamin Britten and President of the Friends of Aldeburgh Music, said:

“If owning Snape Maltings had been even a half a possibility, I feel sure my uncle would have

snapped it up immediately.”

How much has the LSO given up for Simon Rattle? »