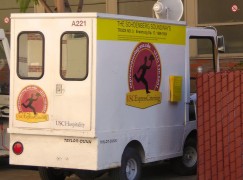 Schoenberg triumphs: his music is played by ice-cream vans

He once predicted it would be whistled by milkmen. No milkmen left, sad to say.

But David Schafer, an art professor at the University of Southern California (where Schoenberg taught) arranged for five hospitality trucks to play Schoenberg tracks around the campus for a week.

The Los Angeles Philharmonic has not played a note of Schoenberg in almost a decade. They’ve lost the trade to the ice-cream merchants.