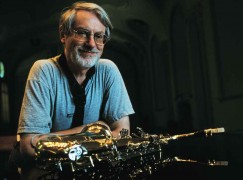 Respected Swiss musician gets ripped off by Jay Z

The American rapper Jay Z has agreed to pay half the royalties from his song ‘Versus’ to a veteran Swiss musician, Bruno Spoerri.

It appears that portions of a Spoerri sample track were mixed into the song.

When the incident was discovered 15 months ago, Spoerri said: ‘In a way I’m flattered that a relatively young rapper takes a sample from an old man, a sample that is about 35 years old.’

Spoerri, 78, is a founder of the Swiss Centre for Computer Music and its former co-director.

Here’s Spoerri’s track (which has gone modestly viral with 100,000 views):

« Bartoli cancels her US comeback