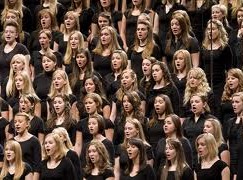 A survey of 10,000 British schoolchildren and 250 teachers finds that those who join a musical ensemble are more likely to make good moral choices in their daily lives. Playing sport, on the other hand, makes no difference.

This is, of course, exactly what we’d like to believe.

The caveat is that the research was conducted by the Jubilee Centre for Character and Virtues at Birmingham University. How objective is that? Report here.

« Maestro beats on with bleeding hand